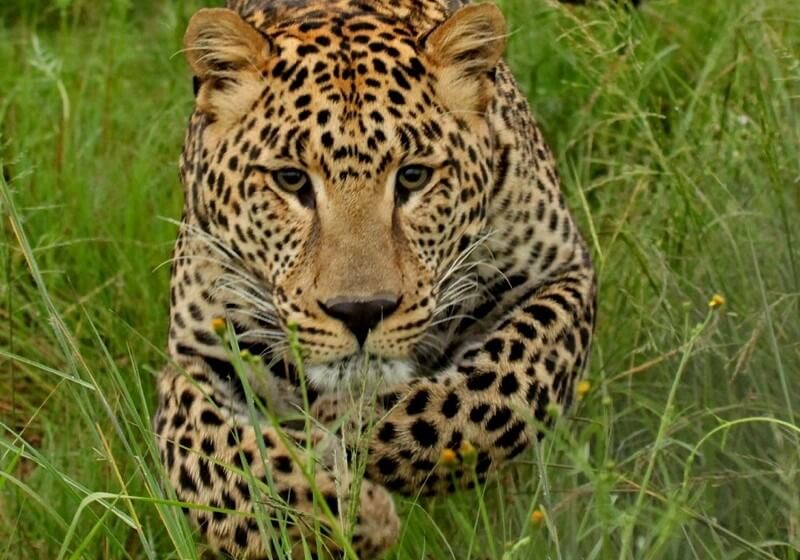 Editor’s Note: Tracy Hardy of Tucson, Arizona, has stared death in the face and confronted the challenge of a three mountain lion attack. Today Hardy tells us how through hard work and luck and with his father’s support, he took two African leopards. 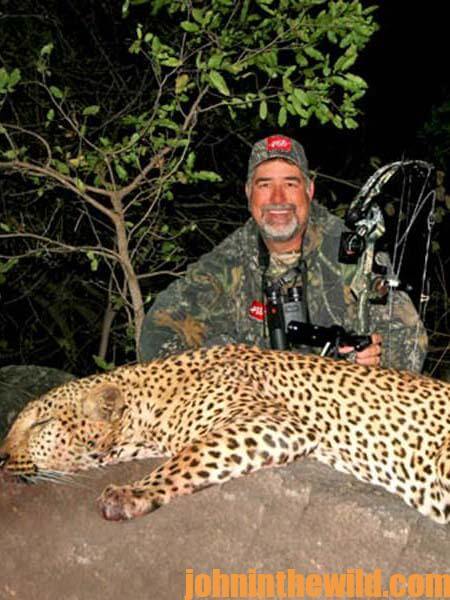 On Hardy’s third trip to Africa with his bow, he hunted with African Wildlife Safaris (http://www.wildafricasafaris.net). He’d already collected most of the plains game, including a kudu, a zebra and an eland. So, his next step was to move-up to the dangerous game, like the leopard and the buffalo.

During a leopard hunt, Hardy stayed up for 3 nights in the leopard blind but only had seen a female and one of her kittens. On the fourth morning of the leopard hunt, the trackers came-in to camp and told Hardy and his professional hunter (PH) that they’d found some big leopard tracks underneath a tree where they’d hung a second bait. So, they decided to change stands.

“In the leopard blind, we had to sit totally silent all night and not move,” Hardy recalls. “The most the PH would let me move was to shift my weight from one butt cheek to the other. Here’s why. Oftentimes a lion will come-in and sit 30- to 40 yards away from bait, waiting for a leopard to come to the bait.

Then when the leopard arrives, the lion will attack.

But leopards are cagey animals, and they often will sit 60 yards from the bait, waiting to see if a lion’s there before they come-in to the bait. The leopard may sit and watch the bait for 1 to 1-1/2 hours before he makes the decision that a lion isn’t there, and he’s safe to come-in, climb-up the tree and eat the bait hanging there. Since there may be two cats within 60 yards of your blind, and both cats are looking for anything that moves, sitting absolutely still is critical to have a chance to take a leopard with a bow. If the leopard determines that you or a lion is near the bait, he’ll leave and not return for many days.”

On the fourth night of the hunt, while sitting motionless in the blind and fighting to stay awake, Hardy was brought to full consciousness when he heard bones cracking and flesh being torn on the bait.

“I was so excited that I thought my heart would jump out of my chest.”

Hardy remembers. “I picked-up my PSE X-Force Vendetta XS (http://www.pse-archery.com), clipped-on my release and prepared to take the shot. When the lights came on, I saw a huge leopard in the tree. My PH tapped my leg, which was the signal for me to draw my bow, aim and wait for him to say, ‘Shoot.’ 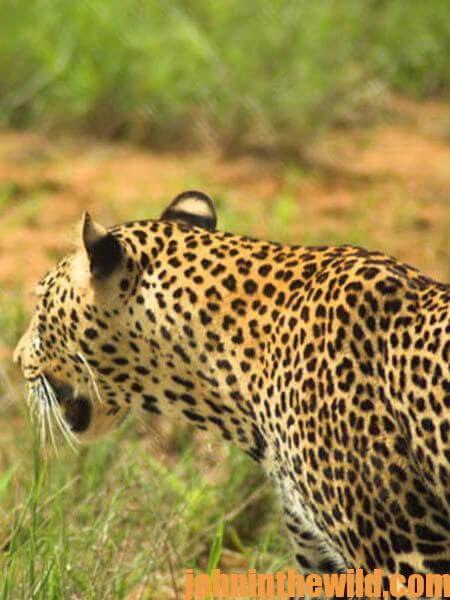 I was so nervous and excited that I couldn’t get my head and my anchor point adjusted well enough to see through the peep sight.

When I finally saw through the peep sight, I couldn’t hold steady enough to keep the pin sight on the kill zone of the leopard. Then, I heard my guide say, “Shoot.” I knew the leopard was a big male, but as soon as I heard the word, “Shoot,” the leopard stopped feeding and looked straight at us. I panicked, touched the trigger on my release and sent an arrow flying out into the night. The leopard jumped out of the tree and went crashing into the brush.”

Later, the PH emailed several-different men with tracking dogs. The next morning at breakfast, he explained to Hardy, “I couldn’t find anyone with tracking dogs who could come and help us find your leopard.” However, the trackers had returned to the site where Hardy took the shot at the leopard and reported that the same leopard had come back that night and almost finished eating the bait.

They knew it was the same leopard, because the tracks were the same, and they found little specks of blood under the tree that weren’t there the previous night. The PH said, “Let’s put-up some new baits, feed the leopard for a couple of nights and then return to set up on him to see if you can get a second shot on this same leopard. I’ll still have to charge you for the leopard, whether you take him or not, because we haven’t been able to recover him with the dogs. However, we’ll try one more time to take him.”

Once Hardy heard the news that he might have another shot on the same leopard, he went to work on his bow.

He took his pocket knife and made the hole on his peep sight bigger. He also took a couple of days off to rest and sleep to get physically and mentally ready for his second chance at the leopard. The first night he returned to the bait and got in the blind, a smaller leopard came in to the bait.

On the final night of the hunt, Hardy and the PH heard bones popping and meat tearing again. “I reached down to 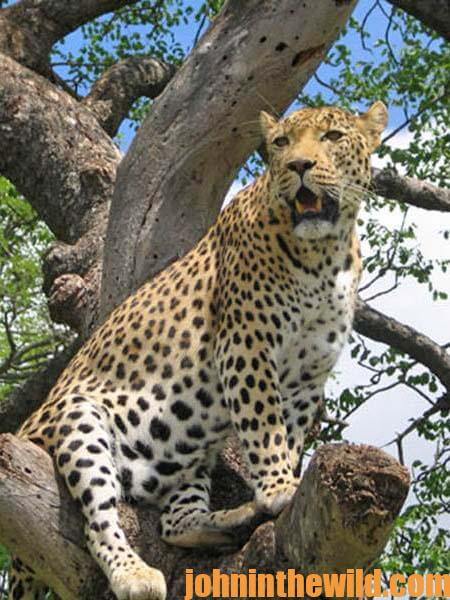 pick up my bow, and the leopard stopped feeding on the bait,” Hardy says. “I froze. The night was black, and the silence was almost deafening. I knew the leopard was looking at our blind, so I tried to be as still as I could be. Next I heard a sound that caused my heart to sink. It was a thump. I knew immediately that the leopard was jumping out of the tree. I thought my chance to get my leopard was over. I heard the leopard walking-away from the tree and jump into another tree next to the tree where we were sitting. Now, the hunt was getting exciting. Both trees were extremely thick with foliage. The leopard was sitting only 10- or 15-yards away from us in a tree right next to our blind, which was made of thatch and was so well-crafted that the leopard couldn’t see us.”

For 20 minutes, the leopard, the professional hunter and Hardy sat motionless, listening to the silence of the dark African night. Then Hardy heard another thump. The leopard had jumped out of his tree and now was back on the ground below him. “I heard the leopard moving through the dead weeds below us,” Hardy recalls. “The next sound I heard was bones popping and meat tearing. The leopard had returned to the bait and was feeding on it.” Hardy let the leopard feed on the bait for about 1-1/2 minutes, although the passing time felt like hours to Hardy.

Finally, the hunter gave Hardy the signal to draw his Vendetta bow. As Hardy was at full draw and aiming at the sound being made by the leopard, the professional hunter turned on the lights. “This time, with the hole in my peep sight much bigger, I could see the leopard in the tree,” Hardy says. “I watched the leopard feeding on the bait. As I aimed, I saw the leopard’s chest. I could see the pin sight through my peep sight. I put the pin right in the middle of the leopard’s chest, and when the professional hunter told me to shoot, I released the arrow. I knew I’d made a good hit. The big leopard tumbled-out of the tree, roared as he fell and hit the ground dead.”

Next: Adrian Erickson and His Most-Scary Elephant Hunt